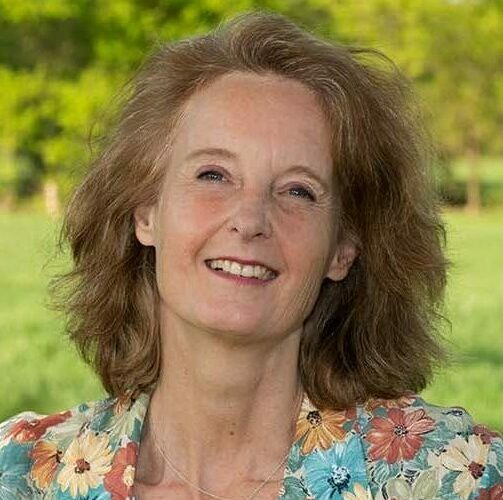 And so: “there I am”. Already two months living in Portugal on a beautiful spot right on the rugged West Coast, a place I had never heard of before, but still my rented Campervan brought me there. The tranquility and space I found here I hadn't been able to experience for a long time.

My youngest daughter had tipped me off about this rental in Portugal and I couldn’t let go of that picture, it kept appearing in my mind, while the word freedom was ringing in my ears. I kept seeing campervans at the same time in the craziest places, while my route planner in my car didn't want to take me home anymore, because it went crazy as soon as I typed the address. I didn't understand it. Or did I?

It's been like that for three years now, since my burnout or awakenings started (what’s in a name.) When I listen to my whispers and follow the trail of synchronicities, no matter how bizarre or funny they seem, the most beautiful things happen. If I ignored them, my world would become heavy and dark again and above all stationary. That place, so familiar to me, it almost felt good, but now I had left my golden cage, and I had flown out.

This was also the case shortly after the passing of my mother a year earlier. But back then my sadness and guilt about my eternally ailing relationship with her, made me go back into my golden cage again. That life, that I had wished for ever since and created myself, often out of a sense of duty, this didn’t belong to me anymore.

Since my decision to opt out for hope, space and the unknown, I no longer saw bird prints on the windows of my home anymore, birds that got hurt because they couldn’t fly through them, and left a wing print on it. The birds I see these days are free, just following their own happy yellow energy, contemplating the world from the air. Lately, when one arrives, it flies in through the open window to fly back, not long after disappearing in the blue sky all by herself.

All those “pictures” of my family (parents) and the society, they turned out to be there only when I wanted to see them like that. I had regarded them as the only possible truth for so long, because they were so deeply rooted in me, without the knowing that these were guiding me without them being my soul’s desire. All of a sudden they were non-existent anymore and the new possibilities were there for me to be picked up as I pleased.

Why do we keep doing things the way we do them, when we notice that they no longer make us happy, when it no longer gives us satisfaction, and every feeling of space and hope coming from deep inside us points in the opposite direction? For years I had been struggling with my feelings of responsibility, guilt and fear, for every bit of freedom dreamed of, off the beaten track. It has been difficult and had cost me and my loved ones a lot of energy. Meanwhile the need to shape my life in my own way continued to grow, to share my stories, to follow my dreams and my rainbows. What message did I actually want to give to my children? That dreams are a deception? That we are stuck forever in our self-created golden cages even-though they no longer fit? Was that the meaning of life? Could the golden cage door not really be opened a little further? To make new possibilities happen? And wasn't that exactly what the world wanted to show us, through everything that challenges us in this moment?

In my young adult years I had formed a picture of my perfect life and I had created it. Picture perfect, Instagram perfect as they say these days. But I knew already something was wrong for a long time. And as perfectionistic and stubborn as I was; I persevered even though all the signals around me were pointing in the opposite direction. But I was tough, wasn't I? So who would tell me where to go? God? The universe? Or was it because change sometimes hurt and causes pain to others too? As the highly sensitive child I had been, I knew only too well what that meant. And so, from my baby years on, I had closed my shutters tightly to become the boss of my own life, trying to shut out all pain, not realizing I was shutting out love as well. And because of this a life of duty was born.

But apparently it was not the intention to stay there. My view of the world began to change steadily because of a spontaneous healing in a meditation, in a moment in time were I still had no clue what healing meant, and some overwhelming travel experiences following magic whispers and beautiful synchronicities. There I would be so lucky again to meet soulmates once again, new relationships that went insanely deep from the start on, and in which I could embrace a forgotten part of myself once more. In those places I was often so in touch with myself and one with nature that I experienced Divinity in everything. How beautiful life was in those moments, how everything around me lit up and how happy and thankful I was in each of those moments to be able to walk around the world and experience all of this. However, these experiences also opened the door in the other direction too, and that brought very different challenges, because apparently I also had to feel these dark parts. A book by Stephen Hawking was brought into the house during a phase were I only could sense that everything was love and connection — light. It was about his vision on the meaning of life. And every time I looked at the picture of the black 'suns,’ his black holes, at the beginning of each chapter, I felt myself sinking into the darkest place imaginable, falling and sweating, cursing the book for what it made me feel. This book had to leave our home. What on earth made him make this choice? Contact with the sun, is for me, the best reload of energy in any given moment. But of course there was no escape in having to embrace the darkness within me. And as the seasons kept unfolding, the duality continued to be brought to me. Everything starts growing in the dark, the most challenging place to be, and yet that is where the seeds germinate.

After a wonderful first week in Portugal, sleeping in my van, high on beautiful cliffs with amazing views and many sparkling encounters, I was spontaneously offered a free nice place to stay. The offer was hard to resist. But I was still having second thoughts, should I stay or go home? But then when I returned the van, there was a car rental company next door, where a small car appeared to be waiting for me, for an amount of money for which you can hardly drive on an electric bike in the Netherlands. Then the choice to stay was quickly made. So now I was going to pick up my laptop to stay in Portugal. At least that was one advantage of Corona. By now I had met so many people who worked from their temporary places of residence. It was possible. And now I was going to do it too. Bringing my stories and vision to the world. And so I went back to Monte Clerigo, a small town on the coast of Portugal, where the energy was insane and I had already been able to let go of all sorts of old patterns and structures. From now on I was going to create my own new world, not from the “cage me” but from the new me, who I am in this moment. Embracing myself in love, including all my mistakes, walking around here in freedom to gain new experiences to love and to learn from. That was not going to happen by remaining unhappy in my old patterns. I wouldn’t make my loved ones happy by making that choice too, that much had become more clear to me with every previous attempt to keep returning to what I already knew. I don't know what life still has in store for me, but I do know that I want magic to be part of it and that more and more often I experience that thrilling feeling of 'I'm alive' again, such an intriguing place to be, because from there the most beautiful new experiences arise. From now on I want to keep on renewing, triggering, sharing and above all being, from the lightness of my heart. No longer from a sense of duty, even though that gave me so much pleasure and satisfaction before. And even though I am no longer very young, this is still my time and my life!

photo above: Possen, CC BY NC